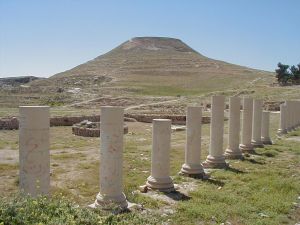 Southeast of Bethlehem, bordering the Judean Desert, King Herod built a fortified palace on an artificial mountain and named it after himself. During the great revolt the fortress was seized by the Zealots, who transformed the royal pavilion into a synagogue. Bar Kochba’s fighters found refuge there as well. In May 2007 a most important archeological and historic find was uncovered – the tomb of King Herod. At the end of 2008 additional discoveries were made: a theater complete with a chamber for VIPs and two sarcophagi where apparently Herod’s wife and the wife of his son Archelaus were buried. These new findings reinforce the hypothesis that the tomb discovered last year was indeed the tomb of King Herod.